Wales  (ウェールズ, Uēruzu) is a fan-made character for the series, Hetalia: Axis Powers. He was given the human name Dylan Kirkland (ディラン・カークランド, Diran Kākurando)

Wales has light reddish-blonde, messy hair, and the same forest green eyes as his other brothers do. He's almost as tall as Ireland, but Shorter than Scotland or, "Scottie," as he calls him. He's normally seen wearing a simple dress shirt and jeans, though on occasion he enjoys putting on more 'outside' attire since he enjoys nature greatly.

Dylan is the third oldest of the four Kirkland brothers, only a little older than England. However, he partakes with treating England just as bad as Scotland and Ireland do, or did at least when he was younger. Now his relationship with England has mellowed down.

With his very cheerful attitude and love for sheep, Wales is liked by most of the other nations. He rarely comes to World Meetings though, leaving all of the "Wasteful time arguing over nothing" to England.

In his free time, he sometimes goes out drinking with Scotland and Ireland but is normally the one who ends up driving them home, since he does not care for that much alcohol. Also, along with the other Kirkland siblings, he can see Fairies and other magical things of the sort.

Wales and Scotland get along well, despite Scotland's hot-headed temper. He seems to be the only one who can calm his big brother down. They go out drinking on occasion, and both are known to visit England on random occasion, as well as Ireland. Sometimes when Scotland gets too wasted, Dylan always welcomes his brother to sleep in his guest bedroom.

Wales is known to be very close to his older brother Ireland, and they love to spend time together, whether it's drinking, playing poker, or just watching movies together. They love picking on England in their free time. Once when they were boys, Ireland felt not needed since Scotland was a better fighter, and England and Wales were more 'adorable than him'. Wales, however, was quick to comfort his brother, saying that Ireland was the luckiest out of them all and that he was also the 'coolest' with his ability to talk to leprechauns.

Though Wales enjoys teaming up with Scotland and Ireland to pick on England, Wales is still very protective of his little brother. He is the one who often visits England the most, doing affectionate things like bring England his favorite brand of tea, and lightly teasing him about his messy hair, though Wales' hair is messy as well. When the boys were little Wales was even kind enough to teach England how to shoot a bow and arrow.

Though a bit odd, Wales likes to hang out with Japan once in a while, whether it's to borrow his cool technology or to use his car. Japan likes Wales, and

Wales with dragon wings instead of a pet dragon 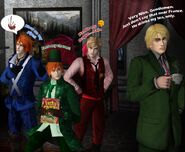 The Kirkland Brothers along with their dirty jokes. Scotland, Ireland, Wales and England
Add a photo to this gallery
Retrieved from "https://hetaliafanmadecharacters.fandom.com/wiki/Wales?oldid=33802"
Community content is available under CC-BY-SA unless otherwise noted.